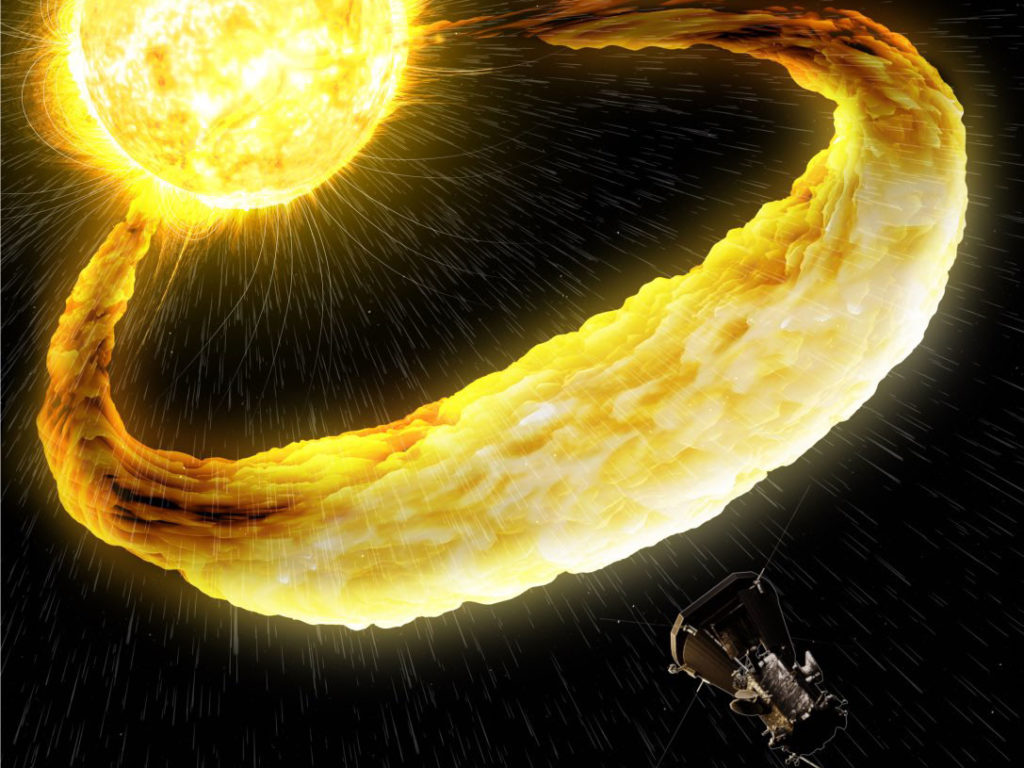 Due to the advancing energy transition, there are currently frequent warnings of possible power blackouts all over Europe. However, less attention is paid to the danger looming from space:
Although solar storms are usually weak and while Earth is adequately protected by its atmosphere and magnetic field, experts believe a solar storm could hit at any time and have a serious impact on power grids, radio networks and satellites. Around ten percent of all satellites could fail during such an event. This would cause problems in areas where precise positioning is essential, such as shipping and air traffic. In addition, widespread power outages are possible due to increased transformer voltages and damage to submarine cables, leading to nationwide Internet outages.

Space weather researchers can monitor whether a solar storm is headed toward Earth but have difficulty estimating how massive the storm will be once it hits. To accomplish this, data experts at Know Center and the Institute for Space Research have developed an artificial intelligence-based prediction tool to better forecast the strength of solar storms. The results were recently published as part of a study in the established “Space Weather” journal. They are part of the EU project “Europlanet 2024 – Research Infrastructure”, which aims to strengthen and advance the European research network in the field of planetary sciences.

“It only takes a few minutes for data measured directly within the solar wind by probes to be transmitted to Earth. First, we tried to establish if the information originated from the first few hours of a solar storm are even sufficient to predict its intensity,” Hannah Rüdisser of Know Center explains.

Based on machine learning, researchers then developed a program to predict the Bz magnetic field component. The program was trained and tested with data from 348 different solar storms collected by the Wind, STEREO-A and STEREO-B spacecraft since 2007. To test the prediction tool in a real-time experimental mode, the team simulates how solar storms are measured by spacecraft and evaluates how the continuous feed of new information improves predictions.

“Our prediction tool optimally predicts the Bz component. It works particularly well when we use data from the first four hours the solar storm’s magnetic core. In the future new space missions will provide us with even more data and further increase the predictions’ accuracy. That is why in the future our approach will lead to improved space weather forecasts, and in the event of massive solar storms, affected areas are warned early on and major damage can be prevented,” Rüdisser states.

As a next step, the research team will use AI methods to automatically detect solar storms within solar winds. This automation will make it possible to apply the method of Bz-prediction in real time without the need of human users to continuously identify solar storms.

While using artificial intelligence for analyzing and classifying planetary datasets is still relatively new, it is increasingly gaining importance. Machine learning allows algorithms to be trained to analyze big amounts of data and to obtain predictions and new solutions. In the last decade potential applications of ML in planetary science boomed, but appropriate tools in this area are still largely missing.

“The European research network ‘Europlanet 2024’ harbors a large treasure of data originated from space missions, simulations and laboratory experiments. Our goal is to retrieve knowledge out of this data and make it usable. To accomplish this, we want to develop a set of ML tools that will assist planetary science researchers in their work. It will allow us to promote a broader use of ML technologies in data-driven space research,” Rüdisser says.

Know-Center is one of Europe’s leading research centers for Data-driven business and Artificial Intelligence (AI). Since 2001, well-known companies have been supported in using data as a success factor for their business. The center successfully handles numerous projects and contract research at EU and national level as an integral part of the European research landscape. The K1 Competence Center, which is funded by COMET, is the leading training center for data scientists in Austria and offers a range of AI training and consulting services to companies. The majority shareholder of Know-Center is Graz University of Technology, a major contributor to domestic AI research, whose institutes handle numerous projects together with Know-Center. In 2020, Know-Center was the only Austrian center to receive the iSpace Gold Award by the Big Data Value Association in the category “European Innovation Space”. www.know-center.at

Would you like to receive our latest media releases automatically by e-mail? Then simply enter your data in our press distribution list: